We are giving away a pair of tickets to An Evening With Dawes: Passwords Tour @ Revolution Hall on September 30. To win, comment on this post why you’d like to attend. Winner will be drawn and emailed Friday, September 28 . 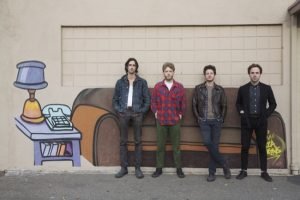 Every online ticket purchase for this Dawes show comes with your choice of a physical CD or digital copy of their upcoming album Passwords. Instructions on how to redeem your copy will be sent via email within 14 business days of your purchase. Offer not valid on re-sale tickets.

It’s been nearly a decade since Dawes first emerged from Southern California, carrying with them a roots-rock sound that nodded to the past – including the West Coast folksingers and cosmic country-rockers who chased a similar muse during the 1970s – while still pushing forward.

Over the years that followed their North Hills debut, the band evolved and electrified. The grooves deepened. The amplifiers grew louder. Once known for their honest approach to classic sounds, Dawes grew into something different: a forward-thinking, boundary-pushing band for the 21st century, willing to follow inspiration wherever it leads.

On the group’s sixth album, Passwords, that inspiration pulls guitarist/singer Taylor Goldsmith, drummer Griffin Goldsmith, bassist Wylie Gelber, and keyboardist Lee Pardini into their most universal, topical territory to date. This is a record about the modern world: the relationships that fill it, the politics that divide it, the small victories and big losses that give it shape. Taylor’s writing is personal at points – the result of his recent engagement, which lends a sense of gravity and self-reflection to album highlights like “Time Flies Either Way” and “I Can’t Love” – but it also zooms out, focusing not on the director himself, but on everything within the lens.

“When I wrote ‘Most People,’ I was trying to get into this headspace of writing about someone else,” he says, name-checking the band’s Triple A radio hit from 2013’s Sto-ries Don’t End. “I didn’t want to grow into the kind of songwriter who only talks about himself, especially when we’re living in such a unique moment in history. Many of these songs are an attempt to come to terms with the modern world, while always trying to consider both sides of the story.”