We are giving away a pair of tickets to The Jesus Lizard @ Crystal Ballroom on September 29. To win, comment on this post why you’d like to attend. Winner will be drawn and emailed Monday, September 24. 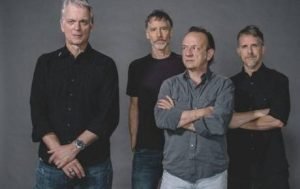 The Jesus Lizard formed in late 80’s Austin, TX after David Yow (vox) and David Wm. Sims’ (bass) previous band Scratch Acid broke up. They started the Jesus Lizard with Duane Denison (guitar) and a drum machine and recorded their debut EP Pure with Steve Albini in 1989. A move to Chicago prompted the firing of the drum machine in favor of Mac McNeilly (drums) and in 1990 the band recorded their first full-length, Head, for Touch and Go.

While the labels “seminal” and “legendary” are often applied too easily, they both accurately describe the Jesus Lizard. They released five more remarkable LPs before disbanding in 1999, the last being 1998’s Blue. During that time, they toured endlessly and issued not only the critically acclaimed studio LPs but also assorted singles, EPs, compilations and a live album. Pitchfork has said of them: “the Jesus Lizard raised a bar that few bands have reached since…Rarely does a band have each member adding something essential to such a united, ferocious whole.”

2017’s tour reminded all that saw the Jesus Lizard that their live show is unparalleled. Brooklyn Vegan noted, “…it would be hard to say The Jesus Lizard have mellowed in the 30 years since forming” and reviewing Houston’s Day For Night Festival, the Houston Press declared, “it was hard to deny that the Jesus Lizard was the best act on Sunday, hands down.” Stereogum have called them “one of the greatest live bands ever” and The New York Times has used the words “extravagantly good” while Rolling Stone speaks of the band’s “shattering live performances.”

All Souls
All Souls formed in Southern California in the winter of 2016. In the short time the band has been active the have already left quite a mark.

The band has deep roots in the now famous Palm Desert scene that birthed Kyuss, Queens of the Stone Age, Eagles of Death Metal, Fatso Jetson, and earthlings?. Tornay having been raised in the desert and a part of that scene since the mid-‘80s, and the rest of the band being in the orbit since the early ‘90s. As a band All Souls wanted to take from their shared sense of warped, dusty chaos and add a melody and a harmony to it.

In less than a year All Souls has gone from playing local Los Angeles shows to playing theatres and tours with The Sword, Kvelertak, Torche, and (the) MELVINS. During this time they recorded their debut album with Toshi Kasai (Tool, Foo Fighters, Melvins). While building a solid fanbase from their explosive live show, they have also caught the ear of rock heavyweights Tool and Mastodon.