We are giving away a pair of tickets to Al Di Meola Opus Tour 2018 @ Aladdin Theater on September 19. To win, comment on this post why you’d like to attend. Winner will be drawn and emailed Monday, September 17. 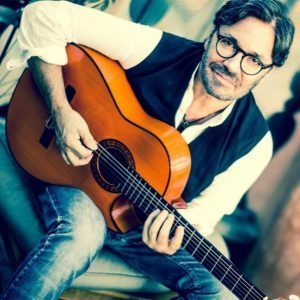 A bona fide guitar hero and perennial poll-winner, Al Di Meola has been recognized internationally over the past four decades as a virtuoso of the highest order. A prolific composer and prodigious six-string talent, Di Meola has amassed over 20 albums as a leader while collaborating on a dozen or so others with the likes of Chick Corea, Stanley Clarke, Lenny White, John McLaughlin, Paco de Lucia, Jean-Luc Ponty and more. And while his dazzling technique on both acoustic and electric guitars has afforded him regal status among hordes of frettboard aficionados who regularly flock to his concerts, the depth of Di Meola’s writing and compositions along with the soulfulness of his guitar expressions, have won him legions of fans worldwide.

A pioneer of blending world music and jazz, going back to early Latin-tinged fusion outings like 1976’s Land of the Midnight Sun, 1977’s Elegant Gypsy and 1978’s Casino, the guitar great has continued to explore the rich influence of flamenco, tango, Middle Eastern, Brazilian and African music throughout his long career.

Di Meola’s most recent release, 2013’s “All Your Life”, was an acoustic tour de force that had him revisiting the music of a seminal influence – The Beatles. “I really credit the Beatles for the reason why I play guitar,” he says. “That was a major catalyst for me to want to learn music. So their impact was pretty strong.” A virtual one-man show of virtuosity, it features the guitar great interpreting 14 familiar Beatles tunes in the stripped-down setting of strictly acoustic guitar. All the tracks are imbued with the guitarist’s signature flamenco flourishes, intricate arpeggiating and dazzling cross-picking. Recorded at Abbey Road Studios in London, where the Beatles created most of their records during their heyday, “All Your Life” stands as a triumph in the long and illustrious career of a bona fide guitar hero. “I’ve come full circle with this,” says Di Meola. “I started out my life loving the Beatles, and I never stopped, just like a lot of so many other guitarists from my generation. In the middle, we all went into whatever music we pursued in our careers — fusion, jazz, whatever it might be. We all wanted to further our craft. But when you come back to the Beatles’ music, it’s like; “Man, this stuff is still happening! All of it!”