We are giving away a pair of tickets to Murder By Death @ Wonder Ballroom on September 15. To win, comment on this post why you’d like to attend. Winner will be drawn and emailed Friday, September 14. 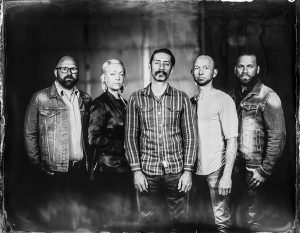 On the surface, Murder By Death is a Bloomington, IN quintet with a wry, ominous name. But behind the geography and moniker is a band of meticulous and literary songwriters matched by a specific brand of brooding, anthem-riding balladry and orchestral indie rock.

Murder By Death’s path began in the early 2000s as most Midwestern college-town groups do, by playing to small crowds at ratty venues and frenzied house parties. While many of their formative-year scene-mates failed to make it much further than campustown’s borders, Murder By Death translated their anonymous beginnings into a 10+ year career founded on a bedrock of five full-length albums, tireless D.I.Y. touring and performing ethics, and, most importantly, a dedicated, cult-like fanbase.

Since the band began in 2001, their audience has blossomed due in part to extended tours alongside similarly hardworking musical kin such as Against Me!, Gaslight Anthem, Lucero, William Elliott Whitmore, Ha Ha Tonka, and others. Through more than 1,000 performances across the United States, Canada and Europe, Murder By Death has gained word-of-mouth devotees and support from the likes of media outlets like SPIN Magazine, who said of the band, “They brawl like Johnny Cash’s cellmates or dreamily swoon like Nick [Cave], stomping saloon floorboards in 4/4 time as grand strings fade into high noon.”