We are giving away a pair of tickets Frank Turner & The Sleeping Souls @ Crystal Ballroom to on September 6. To win, comment on this post why you’d like to attend. Winner will be drawn and emailed Friday, August 31. 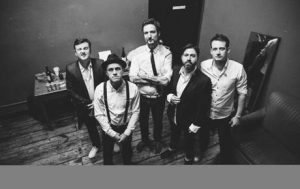 Frank Turner has announced details of his forthcoming seventh studio album entitled Be More Kind available on May 4th via Xtra Mile Recordings/Polydor UK /Interscope Records. The album is available for pre-order HERE and those who pre-order will receive instant downloads of “1933” and the previously released track “There She Is” from the 2017 release Songbook.

Months after the release of Songbook, a career-spanning retrospective which also saw reworked versions of tracks from across the past decade, Be More Kind represents a thematic and sonic line in the sand for the 36-year-old. It’s a record that combines universal anthems with raw emotion and the political and the personal, with the intricate folk and punk roar trademarks of Turner’s sound imbued with new, bold experimental shades. Be More Kind is produced by Austin Jenkins and Joshua Block, formerly of psychedelic-rock Texans White Denim, and Florence And The Machine and Halsey collaborator Charlie Hugall. “I wanted to try and get out of my comfort zone and do something different,” says Turner.

Turner was halfway through writing a very different sort of album, a concept record about women from the historical record who had been ignored, when he was reading a collection of Clive James’ poetry and one particular line compelled him to re-think his direction. It was from a poem called Leçons Des Ténèbres: “I should have been more kind. It is my fate. To find this out, but find it out too late.” “It devastated me the first time I read it,” he says.

Turner and his band, the Sleeping Souls, were on tour in the USA in 2016 “when the world decided to go collectively nuts” and the songs that make up Be More Kind started to come together. “Somewhere in the record, there’s a convergence of the ideas of personal and political, which is a central theme of the album,” Turner says. One of the driving themes of the album is empathy, even for your enemy. “You should at least be able to inhabit the mental universe of the people you disagree with. If you can’t do that, then how do you communicate with people other than through force of arms, which is something we all agree is a bad idea.”

Turner’s last two records, 2013’s Tape Deck Heart and 2015’s Positive Songs For Negative People, dealt with the fallout from a break-up and saw Turner struggling to cover the cracks in his personal life. Now happily in a relationship and living with his partner and their cat, he again set his sights to the bigger picture. Positive Songs… was cut in nine, intense days whereas Be More Kind was made over a period of seven months, giving Turner the opportunity to turn songs on their head, try different versions and shake up the dynamics within his band.

The first track to be released from Be More Kind is “1933,” a clattering, state-of-the-nation anthem. Furious and direct, it’s inspired by articles Turner saw that suggested the alt-right was punk rock. “That filled me with a mixture of incredulity and anger,” says Turner. “The idea that Breitbart or Steve Bannon think they have anything to do with punk rock makes me extremely angry.”

The Be More Kind World Tour will begin in the UK in April and head to North America on May 31, with its first leg playing to over 200,000 people across the UK, the USA, Europe, Canada, Australia and New Zealand, taking them through to Christmas. Turner promises that 2019 will include visits to some “slightly more weird and wonderful places.”