We are giving away a pair of tickets to An Evening with Belly – 2018 DOVE Tour @ Revolution Hall on August 11. To win, comment on this post why you’d like to attend. Winner will be drawn and emailed Monday, August 6. 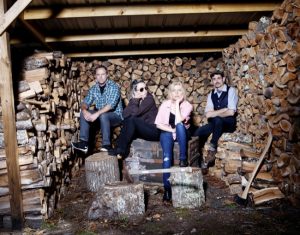 After amicably exiting Throwing Muses and The Breeders, Tanya Donelly formed Belly in 1991 with brothers Tom and Chris Gorman, and were joined soon after by Gail Greenwood on bass. Belly released two albums ~ the first being Star, which earned the band two Grammy nominations and eventually sold two million copies worldwide ~ and the second album being King, which was produced by the legendary Glyn Johns and released in February 1995. After several extensive world-wide tours (including opening slots for REM, U2, and the Velvet Underground, and tours with Radiohead, Catherine Wheel, and the Cranberries), Belly unfortunately fell prey to the all-too-common rock-and-roll cliché of industry pressure, financial issues, personal conflict and divergent creative ambitions. The band played its last show on Nov. 11, 1995. Tanya went on to release five albums under her own name. Gail spent three years playing in L7, then two years with Bif Naked, and continues to play guitar in Benny Sizzler, her band with her partner Chil. Chris and Tom opened a commercial and fine-art photography studio in New York City. In 2015, Chris published his first children’s book, Indi Surfs. Tom briefly played guitar and keyboards with both Buffalo Tom and Kristin Hersh.

In late 2015, twenty years after last playing together, the band decided it was ‘now or never’ and announced Belly would reunite for a limited tour in 2016. Falling right back into a laughter-fueled groove as they began rehearsing for the tour, they decided to write a few new songs together. At the end of that joyful and successful tour, they decided to expand on the idea and write a full album’s worth of music together and are now in the process of recording the new album with their old friend Paul Q. Kolderie at the board. Belly have partnered with Pledge Music, and the album (not yet named) can be pre-ordered on vinyl, CD, or as a digital download, or as part of a variety of “bundles” and exclusive limited-edition goodies. All advance orders through Pledge include member-only access to updates, peeks into the studio, and a soon to be released digital download of the band’s cover of “Hush-a-Bye Mountain,” recorded just for fun while in the studio.