We are giving away a pair of tickets to Andrew W.K. @ Revolution Hall on September 7. To win, comment on this post why you’d like to attend. Winner will be drawn and emailed Friday, August 31. 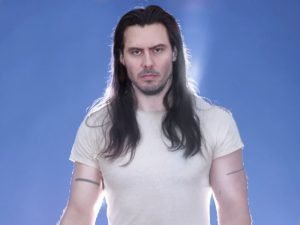 It all began with a feeling.

Of being alone and wanting to belong.

And experience the euphoria of bonding with others.

The feeling became a dream.

To make the most exciting music imaginable.

Music that embraced and celebrated life in all its facets, electrifying and uniting everyone who heard it.

The dream attained reality in major chords pounded out on piano, an unrelenting four-to-the-floor beat, a set of dirty whites, a bloody nose.

And found its voice with these words:

“When it’s time to party, we will party hard.”

It’s safe to say, nobody has partied harder, longer or more fervently than the undisputed King of Partying himself, Andrew W.K.. A one-man music machine possessed of a single-minded, monomaniacal focus to spread a singular message:

That to party is to exist.

And to exist is to party.

This mission he embarked upon in 2001, with the release of his debut single and signature tune “Party Hard,” and has never swerved from since. Released the same year, his debut album I Get Wet, an instant, ageless classic, was a full-throated declaration of that hedonistic intent. Twelve songs, no ballads, delivered at breakneck speed and with maximum intensity from beginning to end. All the bluntness, passion and classicism of rock ‘n’ roll, boiled down and purified to its base elements.

A sound that obliterates ego and bludgeons self.

As an artist, he seemed to have emerged out of nowhere, fully-formed right out of the box, with an image, a style, and a sense of purpose that set him far apart from his peers. If that seemed to good to be true, then maybe it was. Andrew W.K., the critics opined, was either the savior of music or its biggest fraud. Either deadly serious or an elaborate prank. None of which bothered the fans who took up the mantle of the Andrew W.K. ethos, to live every moment as if it was simultaneously their first and their last. Live shows, backed by a six-piece band of hard-driving musicians, became a collective celebration of unbridled joy that often turned entire dance floors into a giant, whirling circle pit of jostling bodies, with sweat and hair flying, and ended in a mass stage invasion that tore down the boundary between artist and audience.