We are giving away a pair of tickets to ANDAZ: A Bhangra/Bollywood/Desi Bass Dance Party 16th Anniversary Celebration! on July 27. To win, comment on this post why you’d like to attend. Winner will be drawn and emailed Friday, July 27. 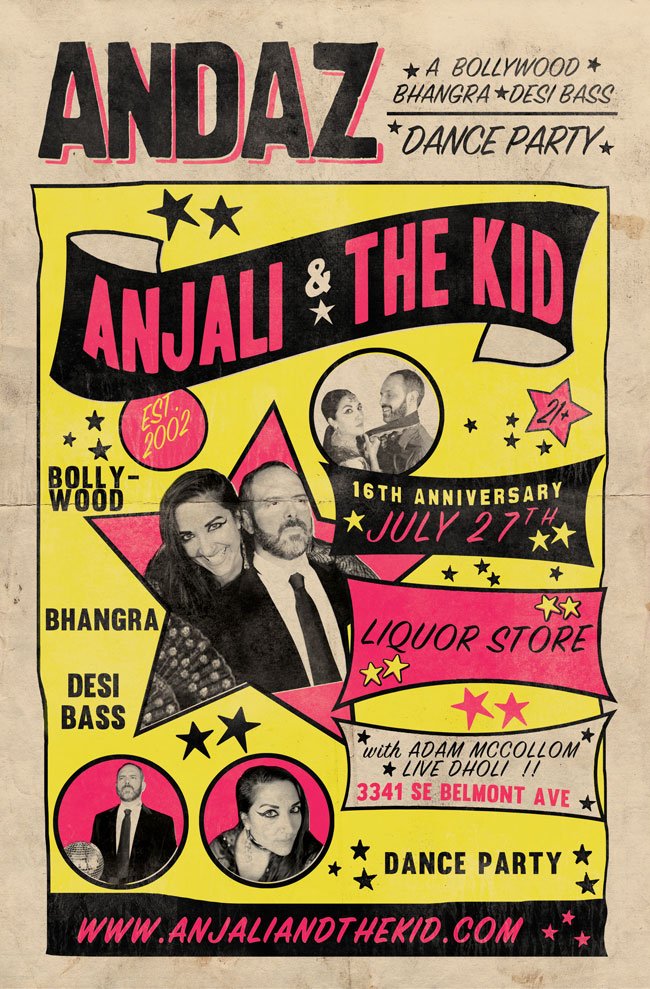 ANDAZ is the longest-running Bhangra & Bollywood dance party in the world, a transportive experience that has enraptured feverishly dancing Portland crowds for 16 years. 2018 also marks the twentieth anniversary of the release of Panjabi MC’s “Mundian To Bach Ke,” which became a top 40 hit for Jay-Z in 2003 as “Beware of the Boys.”

The Portland Tribune featured a story on the 15th-anniversary of ANDAZ.

ANDAZ was featured in a 7-page spread in the May 2017 issue of GQ India.

Anjali and The Incredible Kid won Best DJ in Willamette Week’s Best of Portland 2016 and 2017 Readers’ Poll. The Portland Mercury visited ANDAZ in 2016 and said, “last month’s was WILD. When I arrived around midnight, the Analog Theater’s upstairs was jam-packed for one of Portland’s danciest dance parties.”

Anjali and The Incredible Kid quit the Analog Theater in May when sexual assault allegations began circulating about the owner. Their ANDAZ party currently has no home and will be hosting a series of pop-ups at different venues this Summer.

DJ Anjali and The Incredible Kid have spent more than fifteen years igniting dance floors with cutting edge music not limited by borders or language. They host the longest-running Bhangra and Bollywood party in the world, co-founded the Pacific Northwest’s first Global Bass dance party and host two weekly radio shows on XRAY.FM and KBOO.FM. Few DJs can be said to have changed the sound of their city but that is exactly what DJ Anjali and The Incredible Kid have accomplished since they first introduced Portland, Oregon nightclub audiences to the many varied sounds of Global Bass at a raucous New Year’s Eve debut in 2000. They are most known for incinerating dance floors with the heavy dance floor artillery of South Asia, but the duo scour the globe for any hard-hitting music that combines local music traditions with window-rattling production. Anjali and The Kid regularly perform at festivals including five sets at the Sasquatch! Music Festival (2011), Decibel, MusicfestNW, Vancouver International Bhangra Celebration, Beloved, Photosynthesis, Soul’d Out, Portland International Film Festival, Indian Summer Festival, Kaleidoscope and the Vancouver Queer Film Festival. They have guested at the legendary Basement Bhangra (NYC) numerous times as well as Non Stop Bhangra (SF), iBomba (NYC) and Bhangrateque (Chicago.)