We are giving away a pair of tickets to on August 3. To win, comment on this post why you’d like to attend. Winner will be drawn and emailed Monday, July 30. 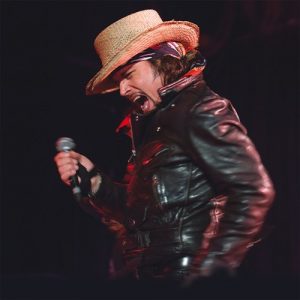 It was on a Thursday night, 16th October 1980, when millions of living rooms across the UK, were set on fire by a blazing TV performance by Adam and the Ants. After 3 ferocious, minutes of ‘Dog Eat Dog’, on the weekly music show, Top of the Pops, the phenomenon rapidly began and they would go on to dominate the charts with extraordinary success.

But this was no ‘overnight success’, Adam Ant had been working hard behind the warpaint and feathers for his moment. The journey had started at Hornsey College of Art, where Adam had teamed up with some college friends to form the band Bazooka Joe. With Adam on bass guitar, they played the pubs and colleges around London and it was on a night in November 1975 that he saw a group that was to change his life forever.

The Sex Pistols played their first ever gig, supporting Bazooka Joe, at St Martins College of Art and the explosive punk band inspired Adam to start something new. He formed The Ants and performed live repeatedly at many venues including the Vortex and The Roxy before getting a Thursday night residency at the famous Marquee club in London. The band built a huge cult following despite being unpopular with the established music press, and in 1979 they released their debut album, Dirk Wears White Søx, which topped the independent chart on release. It has been said that if Adam and the Ants had appeared on television at this time, then they would have ‘made it’ but the moderate success made the rest of the band despondent and in early 1980, the Ants left Adam, after an offer to work with the former Sex Pistols manager, Malcolm McLaren.

With a new sense of freedom and clarity, Adam immediately put his ideas for a new ‘warrior’ sound into practice and within months had put together a fresh band that included two drummers.

Now, in 2018, Adam is traveling the world by embarking on ANTHEMS – The Singles tour in the UK and USA to play a collection of his best singles – from classic hits to B sides and rarities.

The Fixx
The Fixx has been often heralded as one of the most innovative bands to come out of the MTV era. The style and substance of the band has always created a special connection with its audience. The Fixx’s themes are often complex, introspective and thought-provoking and it s also been mass appeal with three #1 hits, five in the Top 5, a dozen reaching the Top 10 and millions of albums sold worldwide.

Instantly recognizable, The Fixx sound is unmistakably unique and stands out among the thousands of artists filling the airwaves. Songs such as “One Thing Leads To Another”,“Red Skies” and “Saved By Zero” remain everyday staples on the playlists of the rock, Hot AC and alternative radio stations that continue to break new acts inspired by the era that The Fixx helped to define.