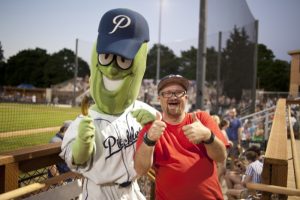 The Portland Pickles are off to a great start this season and we couldn’t have done it without the best fans in the WCL! The Pickles opening night drew a record crowd of 2,507 people and we need more of that great support as the season goes along. The Pickles hope to see more of you at beautiful Walker Stadium in Lents Park this June.

The Pickles are currently in a three game matchup with the Yakima Valley Pippins and would love your support as they try to win the series. On Thursday June 14th the Pickles are celebrating Pride Night. There will be pride themed shirts for sale at the merchandise booth and it’s also Thirsty Thursday so come enjoy a nice refreshing $2 domestic beer, soda, or water.

Don’t forget about next week as the Pickles take on their cross town neighbors the Gresham GreyWolves in a three game series starting on Tuesday June 19th. It’s Jurassic Park night come celebrate 25 years of Jurassic Park and keep an eye out for Dinosaurs roaming around Walker Stadium. Wednesday June 20th they have rescheduled Portland Baseball History Night and also Woof Wednesday Fueled by Lagunitas featuring a dog collar giveaway. Wrapping up the series is a game on Thursday June 21st which is Breast Cancer Awareness Night presented by Compass Oncology. There will be a game worn pink jersey auction you won’t want to miss!

The Pickles have won their first 3 West Coast League series of the year and are off to a hot start to the season. Bring the family out and enjoy the best seat in the town! Buy tickets now at PortlandPicklesBaseball.com. All promotions and giveaways subject to change.