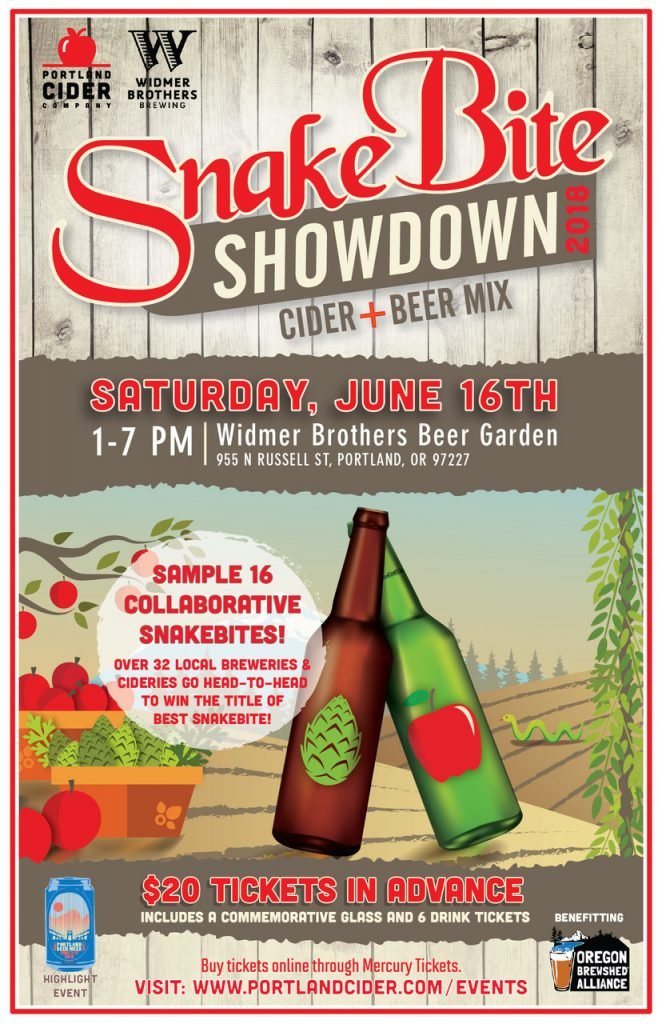 Portland Cider Co. has announced details for its second annual Snakebite Showdown, the region’s only festival to focus solely on Snakebites, a popular English refreshment that blends equal parts beer and cider. This year’s showdown will take place Saturday, June 16, from 1pm to 7pm at the Widmer Brothers Beer Garden at 955 N Russell St. The showdown is an official Portland Beer Week highlight event.

The Snakebite Showdown partners together 14 Northwest breweries with 14 regional ciderhouses to create smooth and fruity beverages that pack a punch. The participants will go head-to-head in an epic showdown to win the title for Best Snakebite. The event is designed to raise awareness of a Snakebite, which is ever-growing in popularity, while emphasizing the collaborative nature of the craft beverage industry in Portland.

“Snakebites originally hail from the United Kingdom, where a crisp lager and cider are blended in a 50/50 ratio in a pint glass,” explained Jeff Parrish, co-owner of Portland Cider Co. “The traditional drink has gained a following here in the Northwest where we pride ourselves on all things craft and new in the beverage world.”

Advance admission cost $20 ($25 at the gate), which includes a commemorative glass and six drink tickets; additional tasting tickets will be available for $2 each. All snakebite blends will be one ticket per four-ounce sample. Tickets are available now through Mercury Tickets (https://portland.boldtypetickets.com/events/54668185/snakebite-showdown-2018).

The 21 and over event, which will have food available for purchase, is a benefit for the Oregon Brewshed Alliance, a coalition of Oregon brewers, brewing community partners, and conservationists who understand the value of clean water and protected forest watersheds.