We are giving away a pair of tickets to David Cross “Oh Come On” @ Crystal Ballroom on June 30. To win, comment on this post why you’d like to attend. Winner will be drawn and emailed Monday, June 25. 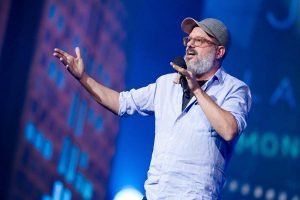 Emmy Award winner and Grammy Award nominee David Cross is an inventive performer, writer, and producer on stage and screens both big and small.

Named one of the Top 100 Stand-Up Comedians of All Time by Comedy Central, Cross last toured the world with “Make America Great Again!,” which took him across the United States, Canada, and Europe. The tour spawned a Netflix special which premiered in August 2016, and a Grammy-nominated CD of the same name. The set, which discussed then-Presidential candidate Donald Trump, gun control laws, and religion, was the comedian’s first standup tour in nearly six years. He had last toured in 2009 with a solo stand-up show in support of his New York Times Bestseller, I Drink for a Reason. That hugely successful comedy show was filmed at Boston’s Wilbur Theater for a special, entitled “Bigger and Blackerer,” which premiered on EPIX in April 2010 before being released on CD and DVD by Sub Pop. His previous comedy special, “David Cross: The Pride is Back,” aired on HBO in 1999, and was named one of the 25 best stand-up comedy specials and concert films of all time by ROLLING STONE in July 2015.

Cross has released two other comedy albums – the Grammy Award- nominated, “Shut Up You Fucking Baby” and “It’s Not Funny.” In 2003 he released the DVD, “Let America Laugh,” a documentary film of his groundbreaking stand up tour of alternative, indie rock clubs.

He recently wrapped production on “Bliss,” a new comedy for Sky in the UK. Serving as writer and director, Cross’s “Bliss” stars Stephen Mangan as a man who must find a way to balance his two separate families.

Cross is currently in production on the Pentagon Papers film “The Papers,” helmed by Stephen Spielberg and co-starring Tom Hanks and Meryl Streep.