We are giving away a pair of tickets to Road To String Summit – World’s Finest & Cascade Crescendo @ Aladdin Theater on June 2. To win, comment on this post why you’d like to attend. Winner will be drawn and emailed Tuesday, May 29. 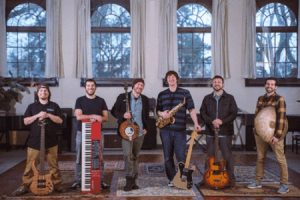 It’s been a wild and crazy ride for the fellas in World’s Finest, since their modest beginning as an acoustic duo in Portland, OR living rooms in 2011. With a songwriting style rooted in Americana, the band banks on their ability to transcend genres of all kinds. String-centric and bluegrass-inspired compositions seamlessly transition into 3-Dimensional Psytrance, Funk, and Dub soundscapes, leaving their audience with a full circle experience of emotion and dance. Their appreciation for punk and ska can be found peppered throughout their shows and albums, made evident by up-tempo, high-energy offerings. Never happy to settle, the band continues to push through boundaries and challenge themselves, while hoping to inspire their listeners to expect the most out of what a band in the modern age can be capable of conjuring up.

Six years, countless shows, and 5 albums later, the band is still firing on all cylinders. The current lineup features 6 members: Chris Couch (Guitar/Vocals), Dan Hurley (Banjo/Vocals), Sean McLean (Sax/Guitar/Vocals), Evan Malfer (Bass), Alex Weinberg (Keys) and Kirk Kalbfleisch (Drums). Their paths have all crossed in Portland, by way of Ohio, Illinois, Eastern Oregon, New York, Idaho and Las Vegas. As a result of such diverse upbringings, it was inevitable that the band’s sound reflected their coast to coast musical influences.