We are giving away a pair of tickets to Summerland Tour – Featuring Everclear, Marcy Playground, Local H @ Crystal Ballroom on June 24. To win, comment on this post why you’d like to attend. Winner will be drawn and emailed Monday, June 18. 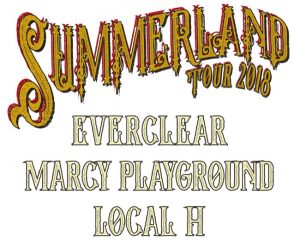 Although the band hasn’t released a new studio album since 2015’s triumphant Black Is The New Black, Everclear continues to tour actively, in conjunction with a series of past-release anniversary dates and the annual Summerland Tour, which Alexakis created and has been running since 2012, featuring a rotating cast of ’90s alt rock favorites. And while it’s a virtual surety that no Everclear gig is complete without a rendition of “Santa Monica” and “Father of Mine,” lately the band has found that exploring the full range of past material-especially the “deep cuts”-not only gives fans a rare treat, it also injects new life into the band’s live dynamic.

In 2017, 90’s alternative rockers Marcy Playground celebrated the 20th anniversary of their self-titled album. They returned to the road on the Rockn’ Roadtrip tour with Fuel and Dishwalla. With label partners, Slow Down Sounds they released the first vinyl edition of their debut album, which included hit single Sex and Candy. The album went platinum back in 1997, selling 1.4 millon copies, while the radio classic “Sex and Candy” spent a then record 15 weeks at #1 on the Billboard Modern Rock Chart. In the interim years, Marcy Playground has released four posterior albums “Shapeshifter” (1999), “Marcy Playground 3” (MP3) (2004), “Leaving Wonderland… In A Fit of Rage” (2009), and “Lunch, Recess, and Detention” (2012). The albums demonstrated tremendous periods of creative growth for the group and are recognized as “cult classics” among the band’s dedicated fans. Their songs are featured on soundtracks such as Cruel Intentions, Antitrust, Simply Irresistible, Hurricane Streets, as well as many films by writer/director Kevin Smith (Jay and Silent Bob Strikes Back, Zack and Miri Make a Porno). Marcy Playground is thrilled to return to the road in 2018 on the Summerland Tour with Everclear and Local H.

Local H is known for their blistering live shows and for pioneering the two-man band set-up — frontman Scott Lucas covers both guitar and bass through an extra pick up in his guitar and drummer Ryan Harding pounds out the rest of the sound. While they have earned praise in the past for their catalog of clever concept albums, Local H have forgone a singular theme on their most recent album — Hey, Killer — turning out a non-stop blast of straight-up, hooky, guitar-heavy rock songs — each one catchier than the last. The band’s discography includes seven other studio albums, A Greatest Hits release, numerous EPs and “Straight Outta Zion,” a Blu-ray concert video released in late 2016.