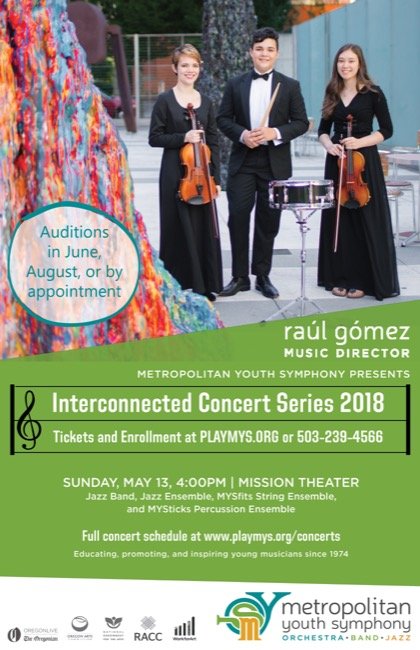 Metropolitan Youth Symphony’s (MYS) advanced ensembles perform their third “Interconnected” concert of the season at McMenamins Mission Theater Sunday, May 13th at 4PM. This series showcases MYS students in smaller, less formal settings with a fun atmosphere and to more fully engage audiences in the musical experience. Performances by the MYSticks Percussion ensemble, Jazz Band and Jazz Ensemble, and the advanced String ensemble MYSFits will cover a range of music from John Lennon and Paul McCartney to Leoš Janáček’s Idyll.

Under the direction of Music Director Raúl Gómez the Interconnected series inspires collaborative performances between a variety of other art forms and engages the listener in a more active role with the music. The audience is encouraged to live-tweet, cast, or post on social media during the performance using the hashtag, #playMYS, guided by prompts which will be delivered by an Emcee or each individual ensemble conductor. MYS will also provide clipboards blank paper and coloring tools and the audience is encouraged to sketch, draw or write during performances. This breaks many formal music norms in that audiences are normally encouraged to sit and listen to ‘feel’ the music. At the end of the concert listeners are invited to donate their creations to MYS.

The May 13 concert also features special guests from the Grammy-nominated chamber orchestra A Far Cry from Boston, who will join MYS students on stage after an intensive weekend of coachings and rehearsals.