We are giving away a pair of tickets to Nano Beer Fest @ John’s Marketplace on April 27-29 . To win, comment on this post why you’d like to attend. Winner will be drawn and emailed Monday, April 23. 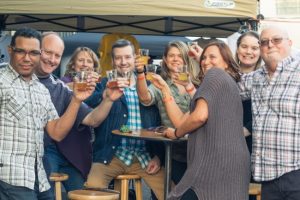 The 2018 Nano Beer Fest returns to John’s Marketplace April 27th – 29th. Started in 2008, the Nano Beer Fest was created as an alternative to the overcrowded festivals featuring main stream beers. NBF has grown to feature over 50 small batch and unique beers, ciders and mead over a 3-day event. By popular demand an all-ages “Family Day” has been added on Sunday, so bring the kiddos and as always, friendly dogs are welcome!

What is a Nano Brewery you ask? Nano breweries are fully licensed, self-distributed, tiny brewing operations, often in garages, on farms or in shared brewing facilities. There can be as few as one keg of some of these creations ever made. Smaller batches equal greater attention to the details of each brewing, yielding incredible results. Many of the beers featured will be only available for a short time and may only be available at the fest itself. The idea is to find BREWERS YOU LOVE as opposed to just a specific beer, cider or mead. Meet the brewers themselves and find out where you can get ahold of their creations year-round.

Starting in 2017 NBF created an alumni status to feature brewers who have grown beyond their Nano status. This year’s alumni brewer will be Cider Riot! Cider Riot will be bringing out limited releases for the event and will be on site to discuss their unique story.

In addition to the brews, there will be raffle prizes, a Shower Pass vendor booth and delicious food by Urban German. John’s Marketplace boasts one of the best beer selections in the city and will have many bottles available from the featured Nano Brewers.