We are giving giving you another chance to WIN a pair of tickets to New Found Glory @ Crystal Ballroomon June 12. To win, comment on this post why you’d like to attend. Winner will be drawn and emailed Monday, April 23 . 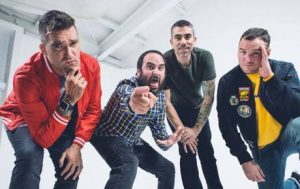 New Found Glory is a pop punk band originally from South Florida. Formed in 1997 and consisting of Jordan Pundik as lead vocalist, Chad Gilbert on guitar, Ian Grushka on bass, and Cyrus Bolooki on drums, New Found Glory has sold millions of records and played thousands of shows all over the world.

Bayside
“I can’t believe this is my life. I’m pretty vacant all the time.”

Although this collection of songs was born out of the loss of a relationship, that experience launched Bayside frontman Anthony Raneri on a mission of reflection and self-examination that makes the band’s seventh full-length a case study in acceptance. “I wanted this record to be more about what’s happening to me as opposed to having it be all about a disintegrating relationship,” he explains. “When I was writing this record I felt like a transient and I think writing Vacancy really helped me work through an experience that I had never prepared for, let alone planned on.”

Raneri is referring specifically to the fact that he left the security of Queens to move to Tennessee for two years with his former wife and their child to make some investments and open a business. However soon afterward he was informed that she didn’t want to return to Raneri’s longtime home and mounting domestic tension eventually lead to the couple splitting up. “I came here thinking it was a very temporary stopover and eventually decided I had to stay here so I could be close to my daughter and that hit me really hard,” he explains. “I was living in an apartment in Franklin and I was calling it the Franklin Hotel because I didn’t know how long I was going to be here. I didn’t unpack, I didn’t hang anything on the walls. I didn’t know what I was supposed to do with myself.”