We are giving you another chance to win a pair of tickets to Experience Theatre Project presents Agatha Christie’s The Mousetrap on March 23. To win, comment on this post why you’d like to attend. Winner will be drawn and emailed Monday, March 19. 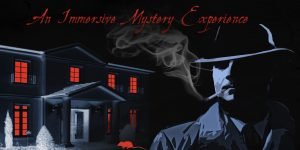 Experience Theatre Project, Beaverton’s resident professional theatre company, proudly presents a fully immersive production of Agatha Christie’s The Mousetrap at the Cady Building in historic downtown Beaverton, located at 12604 SW Farmington Road. The play opens February 16 and runs Thursdays through Saturdays at 7:30 and Sundays at 2pm, until March 25. Tickets $30-$52 available January 15 for purchase at ETP’s website at www.experiencetheatreproject.org. Due to the intimate nature of this immersive show, only 35 tickets will be available per show. Those interested in attending are encouraged to purchase their tickets early as we will sell out.