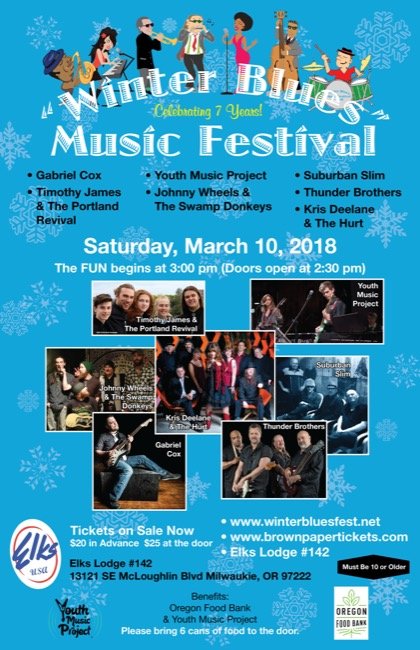 The Portland, Oregon area doesn’t have to wait for summer to enjoy the best in live festival quality entertainment. Now in its 7th year, the Winter Music Festival brings a danceable mix of music acts that showcases the region’s best talent and attracts audiences from out of state, while giving back to charity.

Every year the Festival offers some of the best acts that you would usually see on big festival stages across the country, including such artists as Curtis Salgado, Rae Gordon, Lloyd Jones, Bill Rhoades, Cee Cee James, CD Wodbury and Jim Gustin & Truth Jones from California. This year will be no exception with award winning acts cultivated from the region. Multi-award winning Suburban Slim (www.facebook.com/suburbanslimbandfeaturingjimwallce) is a triple threat, from his incredible guitar work to his singing and songwriting. He has been wowing audiences for years and has been inducted into the Blues Hall of Fame. His band includes long time rhythm section John Neish and Blues Music Award winner Jimi Bott, who has played for years with Delta Groove Recording artists The Mannish Boys.

Guitar playing duo Doug Rowell and Michael Quinby front the Thunder Brothers. This power band hit the scene like a locomotive, winning best new act in 2016 by the Cascade Blues Association and becoming a finalist in the Journey to Memphis contest. Another powerful addition to the 7th annual show is vocalist and multi-instrumentalist Kris Deelane with her 9 piece band The Hurt. She brings you an old school/new school soul show. Her originals and Motown soul hits along with her connection with the audience is memorable. Multi-talented singer/songwriter Gabriel Cox (www.gabrielcoxmusic.com) was recently nominated by the Cascade Blues Association for a Muddy Award for Best Regional Blues Act and was a finalist in their Journey to Memphis contest. His CD release last year has been played around the globe and was nominated for the Blues Foundation’s Best Self-Produced Album. His music blends the best of rock blues and funky soul and is also featured in commercials and in NBA games.

Timothy James (www.timothyjamesmusic.com) has been called an old blues soul and even at the tender age of 15, he has been making a name for himself for years. He has shared the stage and held his own with seasoned musicians five times his age. A talented songwriter, he is appearing for his second time in January at the International Blues Challenge in Memphis, Tennessee as the youth representative for Portland. Johnny Wheels & The Swamp Donkeys (www.theswampdonkeysband.com) is a fun band that highlights the singing and songwriting of harmonica player and front man Johnny Wheels. His sound and songs take inspiration from what he calls the soul of the Pacific Northwest and his bandmates embrace his mission to “live a song” on the edge.

The Winter Music Festival is held at the Milwaukie Elks Lodge & Ballroom with music on two stages. The venue also offers a large dance floor, a full service bar and food menu, limited on-site parking and is across the street from the MAX Orange line. Doors open 2:30 p.m. and music starts at 3 p.m. with raffle and silent auction items to help with the charities.

The Winter Music Festival has helped many charities throughout the years including C.H.A.P. (Children’s Healing Arts Project), and United By Music North America and this year will be no exception with the Youth Music Project, whose mission is to provide outstanding music education for youth through tuition assistance, and state-of-the-art performance opportunities and the Oregon Food Bank, which distributes food through a Statewide Network of 21 Regional Food Banks and about 970 partner agencies in Oregon & Clark County, Washington.

For those attending the festival from out of town, there are a number of lodging opportunities nearby, including the Milwaukie Inn, Econo Lodge and Kings Row in Milwaukie, Best Western Rivershore in Oregon City and Holiday Inn Express in Gladstone. There is also dry camping available at the Lodge. Join them on March 10, 2018, listen to award winning acts and make a difference for charity. For tickets, please go to www.winterbluesfest.net or purchase from Brown Paper Tickets (www.brownpapertickets.com). The venue is the Elks Lodge & Ballroom, 13121 SE McLoughlin Blvd., Milwaukie, Oregon 97222.