We are giving away a pair of tickets to Pimps of Joytime @ Revolution Hall on March 2 . To win, comment on this post why you’d like to attend. Winner will be drawn and emailed Monday, February 26. 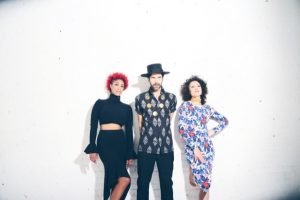 Anyone familiar with the Pimps of Joytime live experience knows the feeling—it’s that moment when a deep bluesy groove morphs into a full-on EDM dance beat, or the sensation when the wide-eyed audience collectively elevates in sync with the band’s tangible energy.

On Jukestone Paradise, the Pimps of Joytime raise the bar with swagger to spare, crafting ten cohesive songs that ring out like the soundtrack for a ride through the diverse Brooklyn neighborhood where their sound materialized. Pulling from lead guitarist and singer Brian J’s deep discography of influences, the creation of Jukestone Paradise began a decade ago, when he penned anthems like “Sky” and “Freedom Dancer,” all the way up to the album’s studio recording sessions.

You might accurately call the Pimps of Joytime a ‘post-genre’ band; they’re a group whose sound—even within a single song—mirrors the diversity of our era’s musical tastes. “It’s a sonic tapestry that’s representative of this time and place that we live in,” says Brian J.

That’s where the Pimps excel, by mashing up ‘70s funk tones with modern dance beats, mixed with original samples creating their mosaic sound. For listeners weary of today’s DJ culture but eager to dance with abandon, the Pimps of Joytime are the antidote.

“At our core, the Pimps of Joytime are not just dance music,” says Brian J of the band’s three-part harmony attack. “My first vocal mentor was a doo-wop singer, so I have a long-time love affair with vocal harmonies.”

Behind the frontlines are bassist/keyboardist David Bailis and drummer John Staten, forming the rhythmic backbone of the Pimps’ audible collage. And for Jukestone Paradise, they called in a few friends to lend their talents, including Ivan Neville, who lends New Orleans flavor to “Sky,” and Rubblebucket’s Alex Toth, who co-wrote the quirky and infectious “Dance Cardia.”

Just as Brooklyn has changed since the Pimps started, so has the band’s sound. But as Williamsburg gentrifies, the Pimps of Joytime’s diverse evolution keeps the neighborhood’s spirit alive. That spirit goes into the Pimps’ pot, over a soulful roux of rhythm and groove.