We are giving away 2 pairs of tickets to The Motet @ Revolution Hall on December 31. To win, comment on this post why you’d like to attend. Winner will be drawn and emailed Monday, December 18. 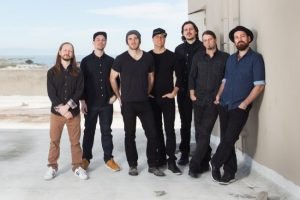 Bridging the gap between retro funk & soul, while keeping a focused eye on the future of funk, The Motet blasts off with their latest single, Supernova. The recent addition of singer Lyle Divinsky, who joined the band in 2016, fans the flames of this already hot band. His sinfully soulful voice and rich lyrics are powerfully prevalent throughout Supernova and light up the performances of the 7-piece funk powerhouse.

The Motet began in 1998 in Denver, Colorado, where the band’s then-rotating cast of musicians amassed an enthusiastic and loyal throng of hometown fans. The Motet took their infectious dance parties on the road about four years ago, and their national fan base has been growing exponentially ever since. Today their shows sell out from coast to coast at iconic venues Red Rocks Amphitheatre, The Fillmore in San Francisco, Tipitina’s in New Orleans, Brooklyn Bowl, Chicago’s Park West, Portland’s Crystal Ballroom, and Variety Playhouse in Atlanta. A favorite along the festival circuit, The Motet has performed at Bonnaroo, Electric Forest, Summer Camp, All Good Music Festival, High Sierra Music Festival, Peach Fest and many others.