We are giving away a pair of tickets to Mark O’Connor’s An Appalachian Christmas @ Arlene Schnitzer Concert Hall on December 22. To win, comment on this post why you’d like to attend. Winner will be drawn and emailed Monday, December 18. 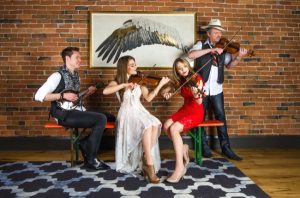 For a fifth and final year, All Classical Portland presents multi Grammy and CMA Award-winning violinist Mark O’Connor with the Grammy Award-winning O’Connor Band in An Appalachian Christmas at the Arlene Schnitzer Concert Hall, Friday, December 22nd at 7:30pm.

O’Connor’s prolific career as a classical music composer and legendary bluegrass fiddler is “one of the most spectacular journeys in recent American music,” (The New York Times) having brought about collaborations with the likes of Yo-Yo Ma, Wynton Marsalis, Alison Krauss, Vince Gill, Earl Scruggs, and James Taylor.

Mark and the O’Connor Band seamlessly combine elements from folk, bluegrass and classical traditions to create “heavenly” (Associated Press) interpretations of Christmas classics that transcend genre and have universal appeal. Family friendly and conjuring all the magic of this special time of year, you won’t want to miss your last chance to experience the magic LIVE!

Winners of the 2017 Grammy Award for Best Bluegrass Album, The O’Connor Band consists of Mark on violin, his wife Maggie on violin and vocals, his son Forrest on mandolin and vocals, Forrest’s fiancée Kate on violin and vocals, and family friends Geoff Smart on bass and National Flatpick Guitar Champ Joe Smart. The band delivers stunning vocal harmonies, classic covers, and sophisticated instrumentals with a fresh sound that has won over fans of every musical style.

Master trumpeter Allen Vizzutti will delight audiences with his gorgeous sound and impressive virtuosity in a brief opening set, and Nancy Ives, principal cellist with the Oregon Symphony, will make a very special guest appearance performing parts originally crafted by Yo-Yo Ma on three selections alongside Mark and the Band.

Let All Classical Portland whisk you away from the holiday hype and take you on an enchanting journey to the heart of Appalachia, where simplicity and beauty rule the season. This “infections mix of roots music” (The Oregonian) is a Portland holiday tradition and tickets are limited, so secure your seats today!

Donors to All Classical Portland receive $5 off all tickets purchased.