We are giving away a pair of tickets to New Year’s Eve w/ Fruition & The Lil’ Smokies @ Crystal Ballroomon December 31. To win, comment on this post why you’d like to attend. Winner will be drawn and emailed Friday, December 29. 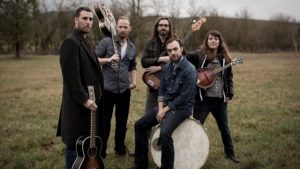 The first time they ever made music together, Fruition’s three lead singer-songwriters discovered that their voices naturally blended into beautiful three-part harmonies. In the eight years since that impromptu busking session, the Portland, Oregon-based quintet has grown from a rootsy, string-centric outfit to a full-fledged rock band with an easy but powerful grasp of soul, blues, and British Invasion era pop.

On their new album Labor of Love, Fruition shows the complete force of their newly expanded sound, matching their more daring musicality with sophisticated, melody-minded song craft. The album subtly imparts the sense of being swept along on a journey, one reflecting an open-hearted spirit that sets in from the first notes of the dobro, mandolin and electric guitar driven title track, carries on to the sleepy soul of “Santa Fe,” and unfolds into the epic balladry of “The Meaning.”

“A common theme for all three songwriters is trying to embrace being out on the road all the time, but also feeling like you’re missing out on the everyday lifestyle that most people get to have,” says Leonard. Embedded within that tension is a wistful romanticism that imbues many of the album’s songs. “Most of the love songs are very much about those rare moments of getting to be with the people you love,” says Anderson. “And then other songs are about coming back to the people you love, and trying to deal with the strange ways things change because of being apart.”

After releasing their debut EP Hawthorne Hoedown in 2008, Fruition moved from busking on the street, to scraping their way onto the lower levels of festival lineups, to opening tours for bands like ALO and Greensky Bluegrass and onward, to being invited to play bigger festivals with ever bigger billing on those lineups.

Last year saw them appear at Bonnaroo, Northwest String Summit and Telluride Bluegrass where Rolling Stone cited their artful choice of covers and “raucous originals filled with heartfelt lyrics and stadium-worthy energy.” This year will see them share a Red Rocks bill with JJ Grey and Mofro and The Infamous Stringdusters, along with a full headline tour of the United States.

That breadth of touring experience has steadily reshaped the band and ultimately allowed them to achieve a sound they’ve long aspired toward. “We all tend to write on acoustic guitar and let things start in the same stripped-down, folky sort of way that we always did,” says Naja. “So where the songs come from hasn’t really changed much at all. What’s different is where we let them go from there.”

The Little Smokies
Hailing from Missoula, MT, The Lil’ Smokies exploded into the bluegrass/stringband scene back in the winter of 2009 and haven’t shown any signs of fatigue since. The Lil’ Smokies have shared the stage with heavyweights like, Steve Martin and the Steep Canyon Rangers, The Nitty Gritty Dirt Band, Keller Williams, Greensky Bluegrass, The Emmit-Nershi Band and dozens of others. Winning the 2013 Northwest String Summit Band Competition has proven that The Lil’ Smokies have no problem captivating large audiences. With a unique blend of traditional bluegrass, newgrass, unique original compositions, and sheer raw energy, The Lil’ Smokies weave seamlessly through genres, leaving something for everyone. Their latest release, “The Lil’ Smokies – Live New Year’s Eve 2013”, captures the raw energy of their legendary Top Hat (Missoula, MT) shows while showcasing new, original tunes, a few from the first album, and a couple boisterous covers. This six-piece ensemble features, Pete Barrett (guitar), Andy Dunnigan (dobro), Scott Parker (upright bass), Matt Cornette (banjo), Cameron Wilson (mandolin), and Jesse Brown (fiddle).