We are giving you another chance to win pair of tickets to X The Band @ Crystal Ballroom on December 28. To win, comment on this post why you’d like to attend. Winner will be drawn and emailed Friday, December 22. 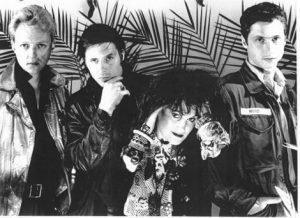 Three decades after the inception of X, one thing is clear: X was not only one of the most influential bands to crash out of the punk movement of the late ‘ 70s, but the band’ s music continues to be sonically groundbreaking today. Songs written during the group’ s inception are as relevant and inventive today as they were in 1977.

The fact is, no one sounds like X and no one ever will.

It’s not surprising when you consider the group’ s unique beginnings, which can only be attributed to fate. On the same day with nearly the exact same wording, two want-ads appear in a local music rag. One was sent in by a guitarist named Billy Zoom, the other by bassist who called himself John Doe.

Zoom, a rockabilly rebel who’ d performed with Gene Vincent, had read a negative review of a band called the Ramones. It said they only played three chords and they played ‘ em too fast. So naturally, he went to see them. The show was at the Golden West Ballroom in the L.A. suburb of Norwalk in early ‘ 77, and as soon as the Ramones started to perform, Zoom realized that, musically, he’ d found exactly what he wanted to do with his life.

Doe, who was originally from the Baltimore area, was already down with the East Coast CBGB’ s scene and by the time the two got in the same room together after responding to each other’ s ads, it seemed it was meant to be. They performed a few shows with various drummers before a poet with no ambition of being a singer would enter the picture.

Doe found her in Venice Beach, at a poetry reading. He liked her poems so much he offered to perform them in his band. The poet, Exene Cervenka, had just moved to town from Florida and she told him, no offense, but if anyone was gonna perform her poems, it would be her, and she soon ended up in the band. Zoom was skeptical about someone’ s girlfriend being in the band. After they did their first show with Exene, he didn’ t know exactly what it was she had, but he knew it was magic.

After a succession of drummers, Doe was at the underground punk club the Masque in Hollywood one night, checking out a band called the Eyes, which featured a pre-Go-Go’ s bass player named Charlotte Caffey. He called Zoom immediately and said he’ d found their drummer. Doe told him he played with a parade snare and hit it hard as a hammer. Zoom told him to promise him anything. His name was D.J. Bonebrake and he quickly signed on. The band was now complete, and X would soon emerge from the young punk scene as one of its most successful offspring.

The band’ s early albums, Los Angeles (1980), produced by Ray Manzarek of the Doors, Wild Gift (1981), and Under the Big Black Sun (1982) explored dark love and an even darker L.A. with the unflinching eye of a Raymond Chandler novel. Doe and Cervenka would marry and later divorce, but they’ d always remain soulmates. As they released each ensuing album, More Fun in theNew World(1983) and Ain’t Love Grand (1985), the band continued to grow sonically and politically, fearlessly mixing genres without ever losing its center. As each member went on to explore diverse careers-careers that included acting, art, writing, producing and multiple side projects.”