We are giving away a pair of tickets to October Power Breakfast @ Sentinel Hotel on October 26. To win, comment on this post why you’d like to attend. Winner will be drawn and emailed Monday, October 23. 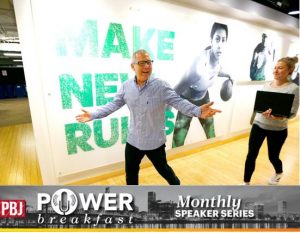 In 2014 Mark King stepped into the role as president of Adidas North America pin pointing the impressive shift in the company. He led the Adidas turnaround in North America, driving market share growth and creating a new energy for the business and culture.

It was recently announced that Adidas, for the first time, surpassed Brand Jordan as the second biggest footwear brand in the United States. In addition to market share expansion, the company is experiencing tremendous growth under leadership of Mark King who helped set Adidas apart by making innovation a major part of the company’s focus.

With all of this excitement and growth surrounding Adidas we’re bringing Mark King himself to our October Power Breakfast to hear fist hand how he’s altering the company and the industry.

Previously, Mark King was the CEO of TaylorMade-Adidas Golf. Under his leadership, TaylorMade-Adidas Golf became the leading and most profitable golf company in the world. Now, he is responsible for driving the vision and culture and believes growth is a cultural mindset that must be infused into the culture of every organization.

Mark received the honor of 2016 Executive of the Year from the Portland Business Journal and sits on the University of San Diego’s board of trustees. He is currently a board member of the Two Ten Foundation, which helps provide financial assistance to people across the footwear industry.

Mark’s leadership at Adidas and their fashion-and culture-forward efforts aren’t slowing down and we plan to dive deep into the story on the morning of October 26th. Don’t wait to register, this is going to be an incredible event!