We are giving away a pair of tickets to Marc Broussard @ Revolution Hall on October 13. To win, comment on this post why you’d like to attend. Winner will be drawn and emailed Friday, October 13. 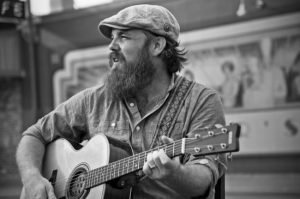 Marc Broussard is an artist with a unique gift of channeling the spirits of classic R&B, rock and soul into contemporary terms. This gift has been a matter of common knowledge since 2002, when Broussard released his debut album, Momentary Setback, which he recorded and released independently at age 20. It was no secret before then, going back to those lucky witnesses who heard him belt “Johnny B. Goode” onstage at age 5 while sitting in with his father’s band. Throughout his life, Broussard has been tapped as a talent to watch.

Marc’s song “Home” was successful at radio and catapulted him onto the national touring stage. His music has been placed in many TV shows and movies. The timeless, soulful nature of Marc’s vocal lends well to Film and TV, and will continue to do so for years to come.

Most recently, Marc released an independent Christmas Album titled, “Magnolias & Mistletoe”. The original song, “Almost Christmas” received radio play word wide. Marc’s next project is a charitable rhythm and blues covers record to be released summer 2016. He will be donating fifty percent of the proceeds to City of Refuge.

“Her sly wit and urbane imagery reminds me of a female Cole Porter.” -John Oates (of Hall & Oates)

Carsie Blanton is a singer/songwriter based in New Orleans. Her newest record, So Ferocious, is “a playful indie-pop record for smart, ferocious libertines”. Her albums range from folk and pop (Buoy, 2009) through Americana and rock (Idiot Heart, 2012; Rude Remarks, 2013), to classic jazz (Not Old, Not New, 2014).

When asked about the genre of So Ferocious, Carsie told DIME Magazine, “making music is like making love; if you only know one way to do it, you’re not very good at it.”

So Ferocious was released on August 2nd, along with three music videos, all of which explore the album’s themes of pleasure, ferocity, and female empowerment. Carsie will be touring to promote the record throughout the fall in the US and Europe.

Carsie has toured extensively throughout North America and Europe since 2006, as a headliner and as support for Paul Simon, The Wood Brothers, The Weepies, Shawn Colvin and many more.

Her live performances, which include material from every album, have been praised for their wit, humor, and captivating charm. In addition to her four full-length albums and two EPs, Carsie has gained popularity for her blog (which tackles questions of love and sexuality) and music videos (including “So Ferocious” and “Baby Can Dance”).