We are giving away a set of 5 tickets to Tropitaal A Desi-Latino Soundclash @ The Goodfoot on August 12. To win, comment on this post why you’d like to attend. Winner will be drawn and emailed Friday, August 11. 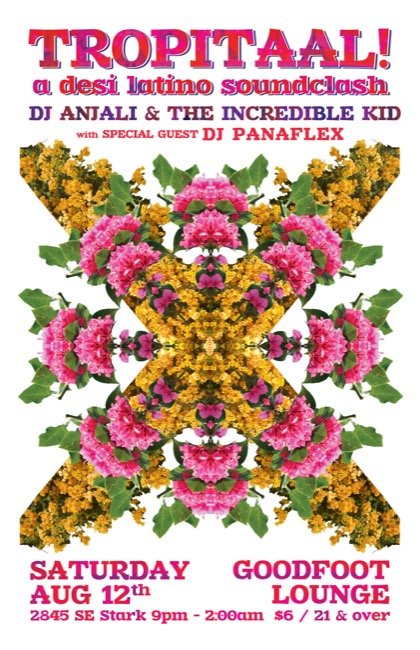 Brooklyn Shanti is widely regarded as an accomplished producer, emcee, and pioneer of Global/Tropical Bass/Dancehall fusion, and is hip-hop’s official cultural ambassador to India (UZN). Over the last decade, Brooklyn Shanti’s unique and innovative artistic voice has enabled the transformation of South Asia’s appreciation for hip-hop. His diverse and wide-ranging talents have led him to work with some of the world’s leading artists including Bollywood legends A.R. Rahman and Sohail Sen, electronic gurus Karsh Kale and the Midival Punditz, the Dum Dum Project, as well as Billy Martin (Medeski, Martin and Wood), Afrika Bambaataa, Thomas Blondet, and the Foreign Beggars, among many others. This spirit of collaboration defines and informs Brooklyn Shanti’s larger vision as an artist and a musician. Of note is a project that came out on the infamous Rawkus Records and his involvement with Brooklyn’s vibrant Dutty Artz collective which has cultivated a Latin/South Asian collaboration with DJ/producer, Geko Jones. He is also currently working on an album with Afrika Bambaataa and Karsh Kale for the South Asian market, with Camp Lo on a Bengal vs Bronx fusion project, and he has enlisted Cumba Mela’s Thornato to work on a Bengali dancehall album. Shanti has also written and released a song based on author Vikram Chandra’s stories, which Chandra has publicly stated that he wants played at his funeral. Shanti is also in the process of putting together a band with Karsh Kale to tour his current album, Bedstuyle.

Hailing from the city of roses, Charlie Thompson (DJ Panaflex) discovered Latin club music at age 13 during a family visit to Monterrey, Mexico, an experience which inspired him to begin compiling mixes, and to begin, five years later to air them on his long-running Electric Lunch program on KBVR Corvallis. In 2008, while living in Guatemala, Charlie began a love affair with sounds he heard there imported from Colombia, Panama, and The Dominican Republic, Jorge Celedon, Hector Acosta, La Factoria, Flex… it was a journey of discovery that would culminate years later on the island of Hispañola where he saw his favorite bachateros perform live and snatched up every new bootleg dembow compilation being sold on the street.

Since returning to Portland in 2013, he has focused his efforts on creating mixed sets in a wide variety of genres including cumbia, dancehall, reggaeton, afrohouse, kizomba, zouk, baile funk, rasterinha, and dembow, which have seen releases on the outstanding Brother Sister and JEROME mix series, garnered support from Michael Bruce (Gran Ritmos, Sonic Lozenge) and Freaky Outty (The Way Up, Snap!), and won him multiple radio appearances in recent months, including Night Drive on XRAY FM and DJ Anjali & The Incredible Kid’s own Kabhi Khushi Kabhie Kush program on KBOO FM.

For over a year, his weekly afro-diasporic sets at Trio Club have been delighting dancers of kizomba, tarraxinha, and semba. More recently he’s joined forces with Nathalia Carvajal as the official DJ of her successful biweekly dance night, KiZouk Connection.

DJ Anjali and The Incredible Kid have spent more than fifteen years igniting dance floors with cutting edge music not limited by borders or language. They host the longest-running Bhangra and Bollywood party on the West Coast, co-founded the Pacific Northwest’s first Global Bass dance party and host two weekly radio shows on XRAY.FM and KBOO.FM. Few DJs can be said to have changed the sound of their city but that is exactly what DJ Anjali and The Incredible Kid have accomplished since they first introduced Portland, Oregon nightclub audiences to the many varied sounds of Global Bass at a raucous New Year’s Eve debut in 2000. They are most known for incinerating dance floors with the heavy dance floor artillery of South Asia, but the duo scour the globe for any hard-hitting music that combines local music traditions with window-rattling production. Anjali and The Kid regularly perform at festivals including five sets at the Sasquatch! Music Festival (2011), Decibel, MusicfestNW, Vancouver International Bhangra Celebration, Beloved, Photosynthesis, Soul’d Out, Portland International Film Festival, Indian Summer Festival, Kaleidoscope and the Vancouver Queer Film Festival. They have guested at the legendary Basement Bhangra (NYC) numerous times as well as Non Stop Bhangra (SF), iBomba (NYC) and Bhangrateque (Chicago.)