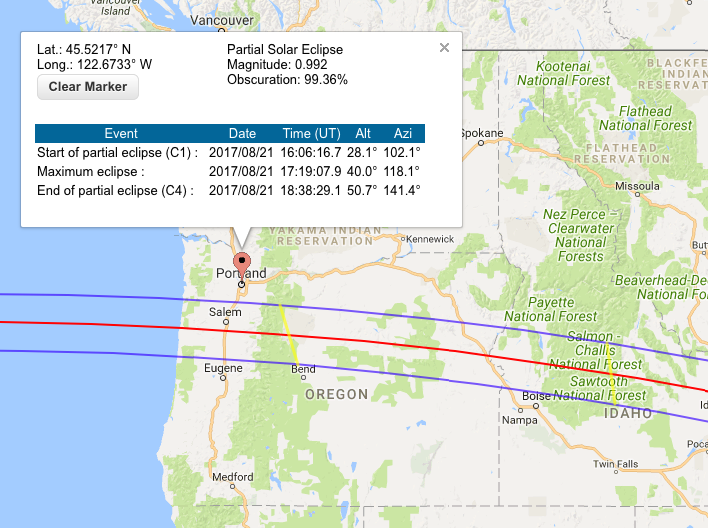 UPDATE: Guide to the 2017 Oregon Eclipse: Times, Glasses, What It Will Look & Feel Like, Video, Pet Info, Traffic, & More

On Monday, August 21, 2017, all of North America will be treated to an eclipse of the sun. Anyone within the path of totality can see one of nature’s most awe inspiring sights – a total solar eclipse. The City of Portland will experience a a partial eclipse with 99.4% of the sun covered.

Still Need Glasses? Pick up a pair of free eclipse-viewing glasses at any library beginning August 1 (one pair per person while supplies last).

On Monday, August 21, 2017, all of North America will be treated to an eclipse of the sun. The places where the moon will completely cover the sun — creating a total solar eclipse — are on what’s called the path of totality. That path includes a swath of Oregon.

The total solar eclipse will touch down between Lincoln City and Newport at 10:15 am, then cross places like Madras, John Day and Baker City before leaving the state at 10:27 am.

Outside the path of totality, viewers will see a partial solar eclipse. In Portland, for example, 99 percent of the sun will be covered by the moon.

NASA has created an interactive Google map that shows the path of the Total Solar Eclipse. Use the map to see the exact time the eclipse will pass over where you’re planning to be.

Sample of Times Near Portland: