We are giving away a pair of tickets to Shafty @ The Goodfoot on July 22. To win, comment on this post why you’d like to attend. Winner will be drawn and emailed Friday, July 22. 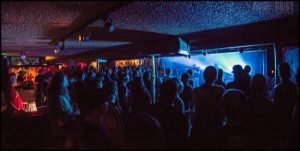 Shafty is the country’s finest Phish tribute band! What began as essentially a goof – a chance to throw down some familiar dancey beats and jam for whoever felt like listening – ultimately lit a spark under the off-the-radar powder keg of Phish fans in the Portland music scene. Brett McConnell (bass) and Rob Sipsky (guitar) spent more time talking about the possibility of putting a Phish tribute together than actually practicing, prior to that first performance at the goodfoot, in February of 2012. Expectations for attendance were moderate at best, yet before the band played the first note, there was a line out the door, culminating in a jam-filled celebration of the music of Phish to an over-capacity crowd! The demand for a repeat was high, and Shafty was born. If there’s a motive, it’s to recreate the energy of a Phish show, with the attitude of playful band-audience interaction at the forefront, sharp musical skill acting as a behind-the-scenes glue to hold it all together.

Over the first year alone, the band played 83 unique songs, ranging from spoken word moments such as Lengthwise, to epic compositions including You Enjoy Myself, Reba, David Bowie, and The Curtain (With), already to multiple sold-out and near sold out audiences. Classic Phish gimmicks are in full force: trampolines, megaphones, choreographed dances, vacuum cleaner solos, instrument switching, and the secret language are alive and well at a Shafty show.