On Instagram? We are GIVING AWAY an Oregon Brewers Fest package of 2 Mugs + 36 Tokens ($50) on our instagram page! Go here to enter and win! 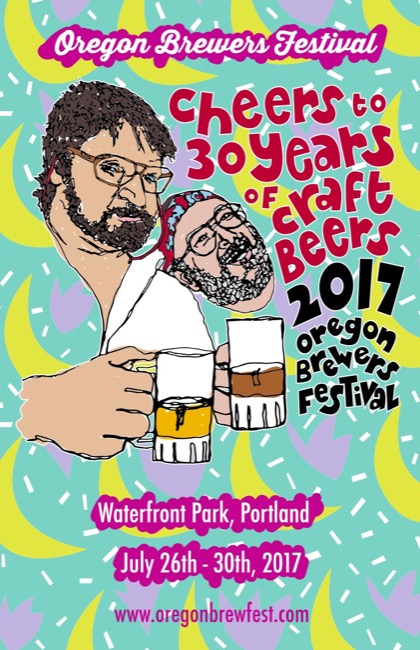 One of the nation’s longest-running craft beer festivals, the Oregon Brewers Festival is considered a destination, and 80,000 craft beer lovers annually make the pilgrimage to Beervana to drink up what the festival has to offer. On a sun soaked July afternoon, there’s no better place to sip more than 150 independent craft beers with friends along the banks of the Willamette River, with the Portland skyline as a backdrop to the west and Mt. Hood towering in the east. Whether you prefer Belgians or Blondes, Pales or Pilsners, Saisons or Wits – come to the Oregon Brewers Festival and see for yourself why we’re one of the world’s best loved craft beer festivals!

This year, the festival is reviving its popular Specialty Tent, where participating brewers send one-off kegs of rare, bold, and experimental beers. Festival attendees can try another 50+ rotating craft beers in the Specialty Tent throughout the duration of the festival.

The Oregon Brewers Festival is not a ticketed event, and there is no admission charge to enter the festival grounds. In order to consume beer, the one-time purchase of a 2017 souvenir 14-ounce clear plastic mug is required and costs $7. Beer is purchased with wooden tokens, which cost $1 apiece. It costs five tokens for a full mug or one token for a taste. The purchase of mugs and tokens is made on-site in one location, although there are a handful of local businesses that sell them up to two weeks prior to the event. The mug/token sales booth is CASH ONLY and does not accept credit cards or checks. The festival does provide eight ATM machines on premise.

The Oregon Brewers Festival is one of the nation’s longest running and best loved craft beer festivals. Situated on the west bank of the Willamette River, with towering Mt. Hood as a backdrop, it is the ideal venue for anyone who loves craft beer. With a laid back attitude and scores of award-winning beers, the festival reflects the essence of the city of Portland, aka Beervana. Approximately 80,000 beer lovers annual visit during the five-day event.

The Oregon Brewers Festival exists to provide an opportunity to sample and learn about more than two dozen beer styles. The festival’s focus is craft beer, but there’s more than sampling involved. The event features live music, beer-related vendors, beer memorabilia displays, home brewing demonstrations and an assortment of foods from a variety of regions. The Crater Lake Soda Garden offers complimentary handcrafted soda for minors and designated drivers; minors are always welcome at the festival when accompanied by a parent.

The Oregon Brewers Festival strongly encourages responsible drinking, and urges patrons to take advantage of TriMet MAX Light Rail line, located just one block west of the festival on SW Oak Street. Plan your trip at trimet.org or m.trimet.org. Go by bus, train or taxi, just don’t drink and drive. Attendees can also take advantage of the onsite Hopworks Bike Corral where volunteers will watch over bikes for free.

10 Responses to Win OBF Package ($50): Oregon Brewers Festival @ Tom McCall Waterfront Park | Featuring More than 150 Beers From Around the US