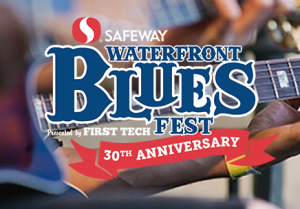 “Five days, four stages and more than 150 eclectic performances. For just $10 a day Waterfront Blues Festival is the concert deal of the summer,” said Artistic Director Peter Dammann. “But it’s much more than that. For three decades this event has supported Oregon Food Bank while reaffirming and strengthening the threads that bind us as a community. This has become one of the great community music festivals and it could only happen in Portland.”

“We are truly humbled to mark 30 years of support from the blues community to feed the human spirit of the 1 in 5 people facing hunger in our state. Since 1988, this iconic festival has raised more than $10 million and 1,000 tons of food for hunger relief. This is an achievement we are extremely proud of — and an achievement that is unprecedented in the concert festival business, said Oregon Food Bank CEO Susannah Morgan.