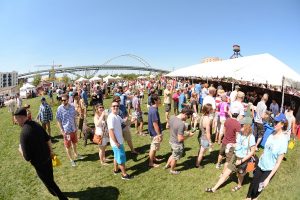 The Portland Craft Beer Festival hosts a premier craft beer event that enables all breweries within the city limits of Portland, Oregon to showcase their beers on a common stage.

The Portland Craft Beer Festival (PCBF) is an annual opportunity for patrons of legal-drinking age to sample a substantial representation of beers originating from every brewery in Portland. What makes the PCBF unique is the fact that only beers brewed within the city limits of Portland will be featured at the PCBF – this is different from the other beer festivals that occur in the city. Aside from beer, there will be selections of Portland’s crafted ciders and wines, as well as locally based food vendors.