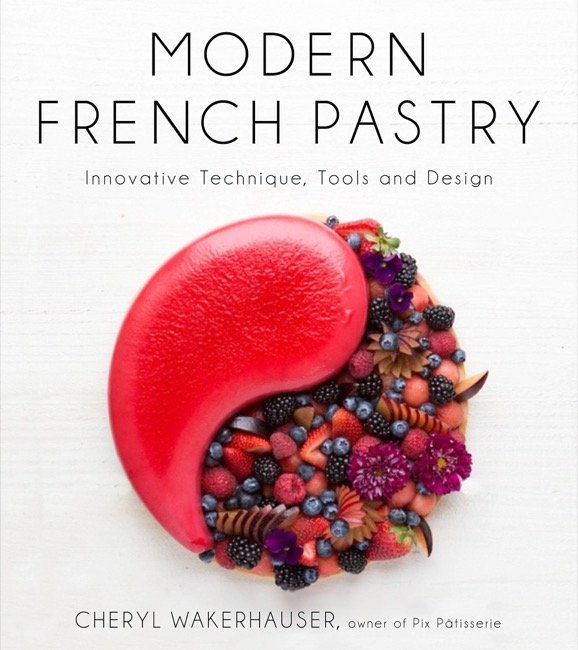 Preorder wherever books are sold!

Looking for a deal? On sale for a limited time at Barnes and Noble for a mere $15.66!

Pix Pâtisserie award-winning chef and owner, Cheryl Wakerhauser(a.k.a. Pix), is known for combining bold flavors and textures into stunning, edible packages sold at her Portland, Ore. dessert oasis. Now, she shares her techniques, flavor combinations and whimsical design (along with a few parlor tricks!) in her acutely instructional cookbook, Modern French Pastry. Amazing looking and tasting desserts so explicably explained it will be a tossup as to who is more impressed – you or your guests!

French pastry is a study in components. Cheryl breaks each recipe down into easy to follow subrecipes that can be done in advance for convenience and even interchanged with other recipes to create your own signature dessert. Instructions for classic French pastry recipes such as pâte á choux, tart doughs and meringues are combined with modern flavors and design. Blue Cheese Truffles anyone? A Moment of Zen takes the fruit tart to a new level with the addition of crème de cassis, blackberry coulis and raspberry mousse. And the éclairs? Cheryl fills them with Bourbon pastry cream and tops them with cherry jam. Think the dessert version of the Manhattan. For the adult ice cream social, here’s a Beer Float recipe complete with caramelized malted barley dipped in chocolate. Simplify your life with instructional “Parlor Tricks” – cook lemon curd, temper chocolate and prepare pastry cream all in the microwave in minutes! Cheryl is not only a pastry chef extraordinaire but a teacher as well, offering the how’s and why’s to each recipe.

After a short-lived career studying to be an astronaut, Cheryl headed to Southern France and trained at the prestigious pâtisserie of MOF Philippe URRACA, president of the Meilleurs Ouvriers de France Pâtissiers since 2003 and judge in the documentary Kings of Pastry and the hit French television series “Qui Sera le Prochain Grand Pâtisserie”. Cheryl’s 16 year old Portland institution has been mentioned in Food and Wine, Elle Décor, Food Network Magazine, Sunset, Wine & Spirits and The New York Times Magazine, where it stated, “Cheryl Wakerhauser’s macaroons trounce Per Se’s.” She is a natural teacher, explaining technique in detail but always adding a bit of pizazz and fun to each lesson, or as she calls them, “Magic Shows.”