We are giving away tickets for a party of 5 to Tropitaal A Desi-Latino Soundclash 4-Year Anniversary Celebration! @ The Goodfoot Pub & Lounge on June 10. To win, comment on this post why you’d like to attend. Winner will be drawn and emailed Friday, June 9. 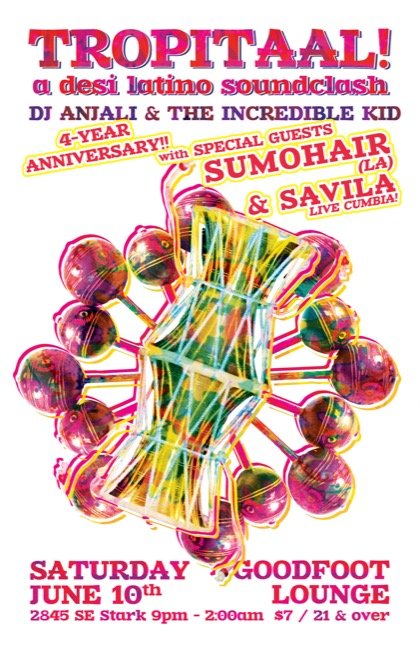 With hosts and resident DJs Anjali and The Incredible Kid.

SUMO HAIR
https://soundcloud.com/sumohair
http://sumohair.bandcamp.com
Interview with Sumo Hair: http://www.electric-llama.com/2015/08/10-minutes-with-sumo-hair-los-angeles-ca/
Documentary on Sumo Hair’s Metralleta De Oro collective: https://vimeo.com/86060368
“Mixing cumbia with hip-hop is my way of expressing the way I felt about my childhood.”
“4 years ago I decided that I was going to learn to record in Ableton. I became obsessed with tutorials on recording and mastering, as I began to build confidence I started to record and remix tracks. I began to pull out a bunch of African, Asian and Latin records from my World Music collection and began to sample them with 808 drums. I really enjoyed what I was starting to create. I wanted to make it a goal to re-introduced these old records to younger generation with a new bass sound. I started a monthly party in Los Angeles with my friends Called “Dinamita” and it has given me an outlet to replicate the sound of street music from various cultures around the world with an electronic feel. I’ve made it a mission to explore the African Diaspora thru music, wether its thru recording musicians or remixing classic records I want to make music that can can document roots and culture in the third world.”

SAVILA
https://www.facebook.com/purosavila/
https://savila.bandcamp.com
“Savila is a medicinal plant that grows wild in tropical climates all over the world as well as the name of cumbia/latin/world/r&b inspired music and visual art project by guitarist Fabiola Reyna, vocalist Brisa Gonzalez and percussionist extraordinaire Papi Fimbres.”