We are giving away a pair of tickets to 4 Peaks Music Festival @ Stevenson Ranch on June 15-18. To win, comment on this post why you’d like to attend. Winner will be drawn and emailed Friday, June 9. 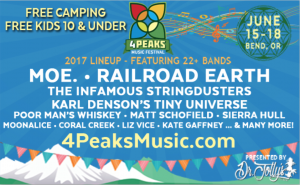 The 4 Peaks Music Festival is excited to announce a new venue for their 10th Anniversary. After months of searching for the right home to host the milestone festival, 4 Peaks Presents has found it in Southeast Bend’s Stevenson Ranch. The 100+ acre site maintains the same Cascade Mountain views and mellow vibe as the previous location, but with an expanded Kids Area, more space for camping, and additional RV parking spots. In addition, 4 Peaks has some tricks up their sleeve for the 2017 festival.

The 4 Peaks Music Festival have announced their 2017 festivities schedule. Thursday’s lineup is highlighted by Oregon bands The Cutmen, Asher Fulero and Company Grand. Railroad Earth headlines Friday, along with a set from Infamous Stringdusters and a late night set by Poor Man’s Whiskey. Saturday will see a Moe. headlining spot, with Karl Denson’s Tiny Universe in the tent and Lebo’s Summer of Love Jam taking over the late night music. Sunday’s schedule is highlighted by rock band Watkins Glen, with Pitchfork Revolution playing tweener sets throughout the day.

4 Peaks is committed to providing an intimate, family-friendly festival, but on a larger scale. Patrons should expect grander views, bigger grassy fields, a larger second stage/late night tent, additional “chill” areas, and a greater selection of vendors. Most importantly, 4 Peaks is able to bring in an even more impressive lineup of world class music from around the world.

4 Peaks’ mission is to provide a multi-day music event in beautiful Central Oregon, featuring an array of eclectic, national, regional and local bands for music enthusiasts, community members and families. The stage is set for the 10th year, as we bring people from all over the region, benefitting the economy of Bend and its surrounding communities.