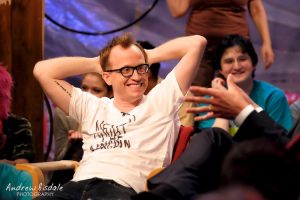 Chris Gethard is a comedian, actor, writer, and the host of the hit podcast Beautiful/Anonymous. His recent one man show, Career Suicide, aired on HBO after a successful off-Broadway run. He’s also the host of The Chris Gethard Show on truTV. He’s been seen on television shows like Broad City, The Office, Inside Amy Schumer, and Parks and Recreation, as well as the movies Don’t Think Twice, The Heat, and The Other Guys. He’s also been featured on This American Life a few times, and Rolling Stone recently named him one of the fifty funniest people right now.